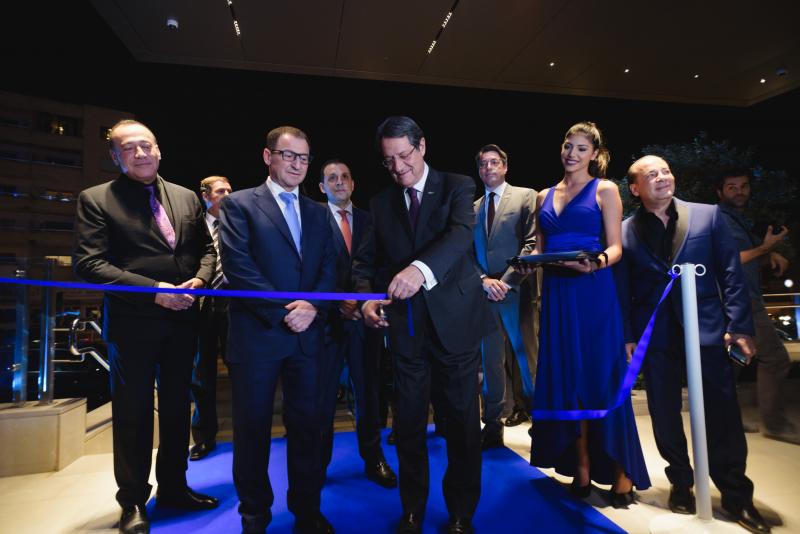 An exceptionally vibrant official opening ceremony for the impressive Radisson Blu Hotel Larnaca and QBlu Plaza took place on Wednesday October 24th by the Larnaca Port, honoured by the President of the Republic of Cyprus, Nicos Anastasiades, alongside ministers, diplomats and a great number of high-profile guests from Cyprus’ socio-political circles, as well as international business men.

The opening ceremony gave guests the chance to explore the premises and gain a first-hand experience of the high-quality services offered at both Radisson Blu Hotel Larnaca and QBlu Plaza.

Inaugurating the opening ceremony of Radisson Blu Hotel Larnaca and the QBlu Plaza complex, President of the Republic of Cyprus, Nicos Anastasiades said that he is “delighted to launch this great development project that not only positively promotes the city of Larnaca, but Cyprus as a whole”.

Reflecting the president’s sentiments, Larnaca Mayor, Andreas Vyras, noted in his brief speech that the opening of the Radisson Blu Hotel Larnaca and the QBlu Plaza “introduces a new tourism infrastructure and ushers in a new era, one where Larnaca becomes a city of growth, prosperity, security and many esteemed jobs.”

Presenting the new complex, Savvas Kakos, CEO of Quality Group, proudly stated that the first internationally recognized hotel in the Larnaca district, the Radisson Blu Hotel Larnaca and the Q-Blu Plaza, opens new horizons for growth, offering the city of Zenon an upgrade of its hotel industry, while simultaneously facilitating the growth of Cyprus’ tourism industry.

Marios Polyviou, CEO of Sunnyseeker Hotels, added that “this is an important day for everyone who worked to make this great project a reality,” concluding that, “after three decades, the city of Larnaca once again witnesses a grand hotel opening, the first branded hotel in the city – that of Radisson Blu Hotel Larnaca – whose presence contributes to and enhances our efforts for the financial development of Larnaca.”

Finally, Joep Peeters, Senior Vice President, Franchise, Radisson Hotel Group, stated that his collaboration with Kakos and Polyviou has surpassed the boundaries of a contractual relationship, and they are now preferred partners for several important projects in the pipeline. Peteers announced the signing of papers for the creation of Radisson Beach Resort in Larnaca, as a result of their fruitful collaboration, which will involve a complete conversion of the Princess Beach Hotel. According to the announcement, the hotel will close next November for a period of 12 months and will undergo a refurbishment worth over 20 million euros, aiming to create 75 additional rooms.

The opening event was enhanced by a captivating entertainment programme with jazz bands, DJs, and the fantastic Duo Violins from Greece.

Strategically positioned beside the port and a mere 10 minutes away from the Larnaca International Airport, Radisson Blu Hotel was created to cater to the contemporary needs of even the most demanding professionals, offering an exquisite luxury environment with superior aesthetics. The hotel comprises 106 spacious rooms with views out to sea, 56 sq. m. suites, gyms, a sauna, an outside pool with a bar, all-day restaurant, a lounge bar and a sky bar claiming pride of place at the highest point in Larnaca, along with specially designed meeting areas and conference rooms with state-of-the-art equipment and a capacity of up to 300 people.

This website uses cookies to improve your experience while you navigate through the website. Out of these, the cookies that are categorized as necessary are stored on your browser as they are essential for the working of basic functionalities of the website. We also use third-party cookies that help us analyze and understand how you use this website. These cookies will be stored in your browser only with your consent. You also have the option to opt-out of these cookies. But opting out of some of these cookies may affect your browsing experience.
Necessary Always Enabled

Any cookies that may not be particularly necessary for the website to function and is used specifically to collect user personal data via analytics, ads, other embedded contents are termed as non-necessary cookies. It is mandatory to procure user consent prior to running these cookies on your website.